A four hour special on Freeform Portland featuring all music from the What’s This Called? 100 great albums of 2019 list. A crow listened from outside the window.

While the program has featured end of year shows and lists off and on through the 25+ years What’s This Called? has been going, it has not been an annual tradition. Simply put, some years the show has been more focused on experimental musics in general than on the sounds of the current moment. Oftentimes that is because a given years didn’t feature enough new releases to fill a show or the interest of your host.

This was NOT the case with 2019. Your host Ricardo Wang set out to do a top ten for the year and found quickly that ten was not a reasonable number to list even the most played and enjoyed 2019 album releases from the show. Twenty quickly was not enough either and when it became clear that a list of 100 albums was imminent, research ensued into as many records that had been missed as possible. Perhaps it was because artists wanted to get a great album done for the end of the decade. Perhaps the insane global political climate has made artists want to do something in the only way they know how. Perhaps 2019 was the year artists started to realize that technology and crumbling economics had now made them able to produce and share “professional” quality albums without having to kow-tow to the dying music industry. 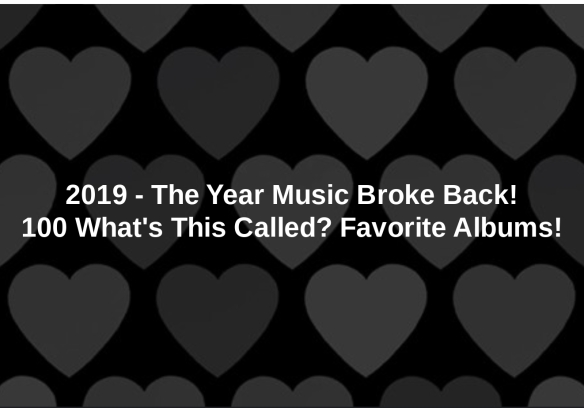 What follows is a list or albums that your host Ricardo Wang has listened to and ranked arbitrarily. The ranking is not based upon airplay or popularity or anything other than DJ preference. The order would probably change tomorrow and would certainly do so in another week. Any record on this list is a great listen, and believe it or not, keeping it at 100!

Saturday, December 21st from Noon to 4 PM Pacific Standard Time we try to play as much from #TheList as possible on Freeform Portland!

In barely over a week, your host, Ricardo Wang has already learned of many other #2019Albums that arguably should have been high on the #Top100 including Pere Ubu, Bill Orcutt, Russian Circles and others! Maybe in January there can be a show of records that Should have been on the list!

Meanwhile we promise while in no way complete, this extra long What’s This Called? will #resonate!

There are two What’s This Called? programs left for 2019 on Freeform Portland, Saturday December 7th (fragments of which are listenable below), and Saturday December 21st which will be a special from Noon until 4 PM Pacific Standard Time.

In honor for what your host Ricardo Wang sincerely believes to be the best year in recorded music since he began DJing some 35 years ago, both programs will focus on music from the What’s This Called? soon to be released Favorite 100 Albums of 2019. The past few years, your host has had a hard time coming up with a top ten albums, but 2019 has seen many, many artists old and new at the top of their respective games.

Unfortunately, this episode featured technical difficulties with the Freeform server that led to interruptions in the live stream and gaps in the digital archive. Bleh. Everything below sounds great, it’s just not as much as people listening on terrestrial radio got to hear. Let this be a lesson to all who put total faith in little zeros and ones. Sometimes the ones go away and you are left with the zeros. Thankfully we saved the great samples below at least.

HEAR SOME OF THE FIRST HOUR HERE!:

HEAR THE END OF THE SHOW HERE!: