Fischkopf Sinfoniker on “What’s This Called?”

Fischkopf Sinfoniker electro experiments in your synapses from Bellingham WA!

(Contains all the raw images shot that day during the performance, including un-edited video clips.) 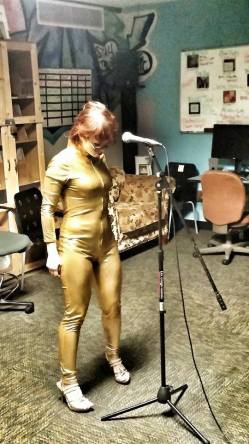 Ilima and her gold jumpsuit have landed in the sub-basement again.

This pre-game show was kicked-off by co-host Austin Rich with a little jazz and 13th Floor Elevators, and then taken over by Ricardo when he arrived.  With a live guest, it’s always nice to have extra time before the show to feature recorded music, too. Ricardo took the opportunity to play some Rawk including Melvins, Red Kross, Black Flag, Big Star, Echo & the Bunnymen, Patti Smith, and MORE!

There was no new episode of WTC? this week due to NoFest, so here’s a re-run of an episode from 2012 which features an interview with J.d. Helwig, No.Fest Organizer.